By the end of this module, you will be able to:

Nomenclature, a collection of rules for naming things, is important in science and in many other situations. This module describes an approach that is used to name simple ionic and molecular compounds, such as NaCl, CaCO3, and N2O4. The simplest of these are binary compounds, those containing only two elements, but we will also consider how to name ionic compounds containing polyatomic ions, and one specific, very important class of compounds known as acids (subsequent chapters in this text will focus on these compounds in great detail). We will limit our attention here to inorganic compounds, compounds that are composed principally of elements other than carbon, and will follow the nomenclature guidelines proposed by IUPAC. The rules for organic compounds, in which carbon is the principle element, will be treated in a later chapter on organic chemistry.

Compounds containing polyatomic ions are named similarly to those containing only monatomic ions, except there is no need to change to an –ide ending, since the suffix is already present in the name of the anion. Examples are shown in Table 8.

Ionic Compounds in Your Cabinets

Every day you encounter and use a large number of ionic compounds. Some of these compounds, where they are found, and what they are used for are listed in Table 9. Look at the label or ingredients list on the various products that you use during the next few days, and see if you run into any of those in this table, or find other ionic compounds that you could now name or write as a formula.

Compounds Containing a Metal Ion with a Variable Charge

Most of the transition metals can form two or more cations with different charges. Compounds of these metals with nonmetals are named with the same method as compounds in the first category, except the charge of the metal ion is specified by a Roman numeral in parentheses after the name of the metal. The charge of the metal ion is determined from the formula of the compound and the charge of the anion. For example, consider binary ionic compounds of iron and chlorine. Iron typically exhibits a charge of either 2+ or 3+ (see Figure 2 in Chapter 2.6 Molecular and Ionic Compounds), and the two corresponding compound formulas are FeCl2 and FeCl3. The simplest name, “iron chloride,” will, in this case, be ambiguous, as it does not distinguish between these two compounds. In cases like this, the charge of the metal ion is included as a Roman numeral in parentheses immediately following the metal name. These two compounds are then unambiguously named iron(II) chloride and iron(III) chloride, respectively. Other examples are provided in Table 10.

Out-of-date nomenclature used the suffixes –ic and –ous to designate metals with higher and lower charges, respectively: Iron(III) chloride, FeCl3, was previously called ferric chloride, and iron(II) chloride, FeCl2, was known as ferrous chloride. Though this naming convention has been largely abandoned by the scientific community, it remains in use by some segments of industry. For example, you may see the words stannous fluoride on a tube of toothpaste. This represents the formula SnF2, which is more properly named tin(II) fluoride. The other fluoride of tin is SnF4, which was previously called stannic fluoride but is now named tin(IV) fluoride.

Naming Ionic Compounds
Name the following ionic compounds, which contain a metal that can have more than one ionic charge:

Check Your Learning
Write the formulas of the following ionic compounds:

In the early 1990s, legal file clerk Erin Brockovich (Figure 1) discovered a high rate of serious illnesses in the small town of Hinckley, California. Her investigation eventually linked the illnesses to groundwater contaminated by Cr(VI) used by Pacific Gas & Electric (PG&E) to fight corrosion in a nearby natural gas pipeline. As dramatized in the film Erin Brokovich (for which Julia Roberts won an Oscar), Erin and lawyer Edward Masry sued PG&E for contaminating the water near Hinckley in 1993. The settlement they won in 1996—$333 million—was the largest amount ever awarded for a direct-action lawsuit in the US at that time.

Chromium compounds are widely used in industry, such as for chrome plating, in dye-making, as preservatives, and to prevent corrosion in cooling tower water, as occurred near Hinckley. In the environment, chromium exists primarily in either the Cr(III) or Cr(VI) forms. Cr(III), an ingredient of many vitamin and nutritional supplements, forms compounds that are not very soluble in water, and it has low toxicity. But Cr(VI) is much more toxic and forms compounds that are reasonably soluble in water. Exposure to small amounts of Cr(VI) can lead to damage of the respiratory, gastrointestinal, and immune systems, as well as the kidneys, liver, blood, and skin.

Despite cleanup efforts, Cr(VI) groundwater contamination remains a problem in Hinckley and other locations across the globe. A 2010 study by the Environmental Working Group found that of 35 US cities tested, 31 had higher levels of Cr(VI) in their tap water than the public health goal of 0.02 parts per billion set by the California Environmental Protection Agency.

The periodic table can be useful when determining charges of ions (notice the trend with the alkali and alkali earth metals), but not all of them (notice the lack of a trend with the transition metal ions). The tables below are a representative sample of some of the more common ions. They are not a complete list of all ions, nor do they show all of the possible ions for the elements that can form multiple charges.

Below is a list of the more common multivalent ions.  The metals that are in red, will be the ones you will be expected to be able to name and know their charges.  The rest are provided as a reference to help with homework.

The polyatomic ions that are in red will be the ones you will be expected to be able to name and know their charges.  The rest are provided as a reference to help with homework. 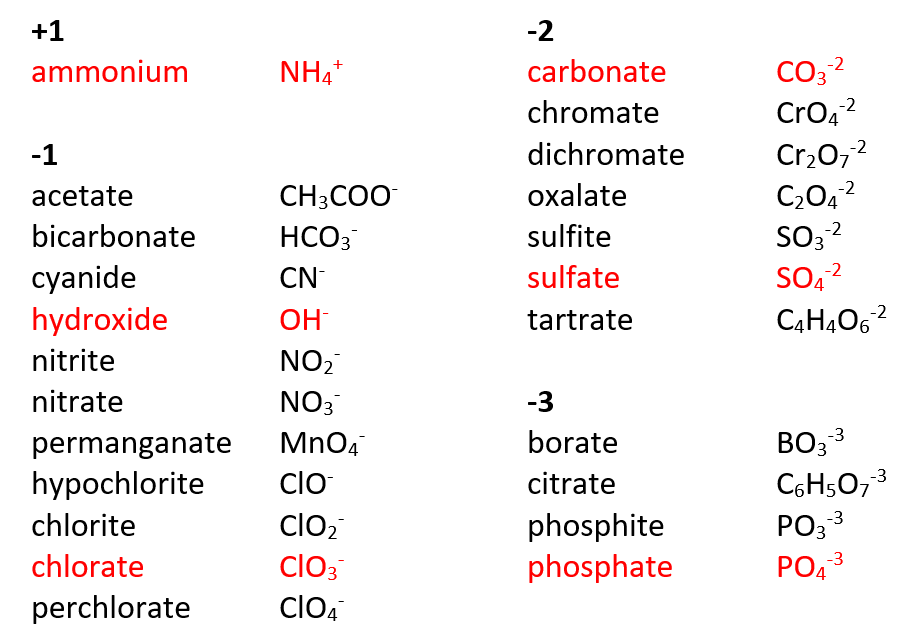 The bonding characteristics of inorganic molecular compounds are different from ionic compounds, and they are named using a different system as well. The charges of cations and anions dictate their ratios in ionic compounds, so specifying the names of the ions provides sufficient information to determine chemical formulas. However, because covalent bonding allows for significant variation in the combination ratios of the atoms in a molecule, the names for molecular compounds must explicitly identify these ratios.

When two nonmetallic elements form a molecular compound, several combination ratios are often possible. For example, carbon and oxygen can form the compounds CO and CO2. Since these are different substances with different properties, they cannot both have the same name (they cannot both be called carbon oxide). To deal with this situation, we use a naming method that is somewhat similar to that used for ionic compounds, but with added prefixes to specify the numbers of atoms of each element. The name of the more metallic element (the one farther to the left and/or bottom of the periodic table) is first, followed by the name of the more nonmetallic element (the one farther to the right and/or top) with its ending changed to the suffix –ide. The numbers of atoms of each element are designated by the Greek prefixes shown in Table 11.

When only one atom of the first element is present, the prefix mono– is usually deleted from that part. Thus, CO is named carbon monoxide, and CO2 is called carbon dioxide. When two vowels are adjacent, the a in the Greek prefix is usually dropped. Some other examples are shown in Table 12.

There are a few common names that you will encounter as you continue your study of chemistry. For example, although NO is often called nitric oxide, its proper name is nitrogen monoxide. Similarly, N2O is known as nitrous oxide even though our rules would specify the name dinitrogen monoxide. (And H2O is usually called water, not dihydrogen monoxide.) You should commit to memory the common names of compounds as you encounter them.

Solution
Because these compounds consist solely of nonmetals, we use prefixes to designate the number of atoms of each element:

Check Your Learning
Write the formulas for the following compounds:

Some compounds containing hydrogen are members of an important class of substances known as acids. The chemistry of these compounds is explored in more detail in later chapters of this text, but for now, it will suffice to note that many acids release hydrogen ions, H+, when dissolved in water. To denote this distinct chemical property, a mixture of water with an acid is given a name derived from the compound’s name. If the compound is a binary acid (comprised of hydrogen and one other nonmetallic element):

For example, when the gas HCl (hydrogen chloride) is dissolved in water, the solution is called hydrochloric acid. Several other examples of this nomenclature are shown in Table 13.

Many compounds containing three or more elements (such as organic compounds or coordination compounds) are subject to specialized nomenclature rules that you will learn later. However, we will briefly discuss the important compounds known as oxyacids, compounds that contain hydrogen, oxygen, and at least one other element, and are bonded in such a way as to impart acidic properties to the compound (you will learn the details of this in a later chapter). Typical oxyacids consist of hydrogen combined with a polyatomic, oxygen-containing ion. To name oxyacids:

For example, consider H2CO3 (which you might be tempted to call “hydrogen carbonate”). To name this correctly, “hydrogen” is omitted; the –ate of carbonate is replace with –ic; and acid is added—so its name is carbonic acid. Other examples are given in Table 14. There are some exceptions to the general naming method (e.g., H2SO4 is called sulfuric acid, not sulfic acid, and H2SO3 is sulfurous, not sulfous, acid).

Chemists use nomenclature rules to clearly name compounds. Ionic and molecular compounds are named using somewhat-different methods. Binary ionic compounds typically consist of a metal and a nonmetal. The name of the metal is written first, followed by the name of the nonmetal with its ending changed to –ide. For example, K2O is called potassium oxide. If the metal can form ions with different charges, a Roman numeral in parentheses follows the name of the metal to specify its charge. Thus, FeCl2 is iron(II) chloride and FeCl3 is iron(III) chloride. Some compounds contain polyatomic ions; the names of common polyatomic ions should be memorized. Molecular compounds can form compounds with different ratios of their elements, so prefixes are used to specify the numbers of atoms of each element in a molecule of the compound. Examples include SF6, sulfur hexafluoride, and N2O4, dinitrogen tetroxide. Acids are an important class of compounds containing hydrogen and having special nomenclature rules. Binary acids are named using the prefix hydro-, changing the –ide suffix to –ic, and adding “acid;” HCl is hydrochloric acid. Oxyacids are named by changing the ending of the anion to –ic, and adding “acid;” H2CO3 is carbonic acid.

binary acid
compound that contains hydrogen and one other element, bonded in a way that imparts acidic properties to the compound (ability to release H+ ions when dissolved in water)

nomenclature
system of rules for naming objects of interest

oxyacid
compound that contains hydrogen, oxygen, and one other element, bonded in a way that imparts acidic properties to the compound (ability to release H+ ions when dissolved in water)